Husband and Wife Ditch the Dirt to 'Focus' on Tarmac

Richard and Claire Avis are the first two drivers to sign up as the new series prepares to go live in April 2019 at Donington Park. 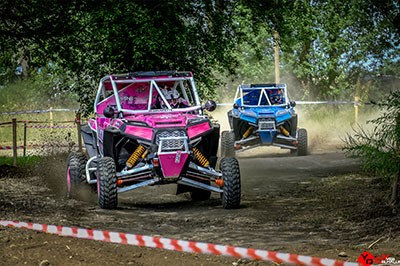 15 years of being together, both on and off track, and you’d think Richard and Claire Avis would be sick of each other by now, but no, they are having just as much fun as ever and about to have a whole lot more!

Both with backgrounds in mechanics and cars/motorsport, for the last seven years they have been racing off road buggies. And fairly successfully too! Running in the experts, Richard was consistently in the top three, having won the championship in the first three years, and Claire consistently finishing off the top five, at her best produced a hattrick of wins (yes, even beating her husband!). But now its time for a change and they are ditching all they have known on the dirt to try out the Focus on tarmac.

In a statement from Claire, she says she is excited and up for a challenge. "I'm looking forward to getting back to tarmac. I did a few years of Rotax karting in my 20s before crossing to the dark side and the dirt. And I won’t lie, the same thrill of circuit racing but without all the mud and hard work of maintaining our own vehicles and cleaning them and our kit up after, certainly appeals! There is a lot to learn with cars on tarmac but I’m always up for a challenge and can’t wait to see this new, one-make, arrive and drive series, take off; with me in a driving seat! The guys running the new venture Simon Walton and Rob Sims are really great. They’re understanding of the novice driver yet encourage us to get the most out of their newly tuned 2.0ltr turbo diesel Focus Cup cars. They have a great model for those of us who have a smaller budget and want to have a break from owning and maintaining our own vehicles."

Richard is initially a little nervous but also excited about his move to tarmac. "All I have known is dirt. I’ve raced motocross most my life and moved to the roll cage protected 4WD buggies because at the age of 40 I didn’t bounce anymore. It’s now time to try something different, put myself out of my comfort zone and see if I can master the tarmac too. Initial testing at both Brands Hatch and Donnington Park (tracks we’ve never driven) have been daunting but a lot of fun for both of us. The torque these cars produce, provide an excellent opportunity to worry less about gears and more about position and speed. I’m looking forward to the prospect of learning from other drivers and think the random car assignment will create a fair platform for driver skill to shine through. I just hope I do better in real life than I do currently on Xbox!"