Round four arrived at the North Yorkshire based track of Croft circuit. Croft is a real drivers track, fast flowing corners out back at the Jim Clarke esses and a slow technical complex also offering the fans great vantage points. Trophy sponsors for the weekend swanflight.com was represented by management who presented the trophies to our podium visitors. 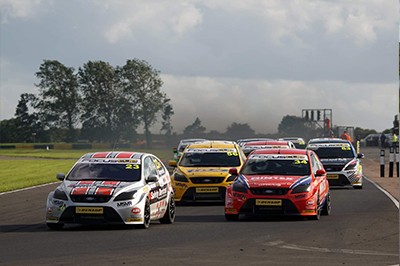 Four new drivers joined the championship for the weekend. Gary Mitchell the first, a local lad to Croft who previously tested the cars here earlier in the year looking to get his teeth stuck in for one round in preparation for an all out season next year. Mitchell who is a well established rally cross driver looking to switch to tarmac setting himself a new challenge. He was joined by another local lad Rob Ryder. Rob has plenty of experience on track with both two and four wheels. He stepped in with sibling rivalry in mind with sister Rebecca Ryder-Rogers racing the full season. Owen Walton another local with decent racing pedigree joined us. Owen currently races in the VW cup in an Audi TT locked in a three way battle at the top of the championship with one round to go. He is also the son of Simon Walton co-director of the Focus Cup. Our fourth new driver came all the way from Macedonia. Branko Kiprovski having his first ever race in the UK after winning many times overseas.

Friday saw the first of four test sessions, the weather again seeming to not be on our side having been dry started to rain as soon as the cars set out on track. The first session saw the ever improving Harry Nunn push the boundaries of the wet conditions underestimating how treacherous it was having a small excursion off track. The times remained very close but with the drivers adjusting to a new track and wet weather and the forecast for race day to be dry it was a day of learning the track not setting fast times.

Session two saw more of the same with drivers slowly getting to grips with the track and conditions. Session three however saw rookie Russell Cager have a huge moment coming into sunny in running out of talent and collecting the tyre wall. This ended the session early and gave the team a mammoth task ahead.

Session four saw the track start to dry out a bit and the drivers picking up more speed and better lap times.

Saturday saw qualifying early on with Gary Mitchell setting the pace from the onset. Following suit was Owen Walton and Andy Wilmot. Owen slipped back through the session leaving a front row of Mitchell from Wilmot. Our top rookie of the session was Russell Cager qualifying third overall.

Race one got underway in dry sunny conditions. Mitchell on pole from Wilmot, both making demon starts going into turn one nose to tail with Mitchell holding on to first, further back Clare Avis battling hard with Harry Nunn and Simon Watts saw Simon Warr break free mid pack. The pack still close together at the front heading to tower Owen Walton took the inside line out braking Cager for third. Cager tried to shut the door a little too enthusiastically resulting in contact between the two. Cager losing out and Owen maintaining position. By lap three Mitchell had clawed a one second gap to second placed Wilmot with Owen in third catching fast. Catching Owen was rookie Richard Avis, once again Richard showing he won’t be donning rookie status for long. He caught Owen with a lap to go and had a few cheeky looks up the inside leaving a drag race to the end. The recovering Cager came through to pip Branko Kiprovski to the line in what was a hard fought battle. 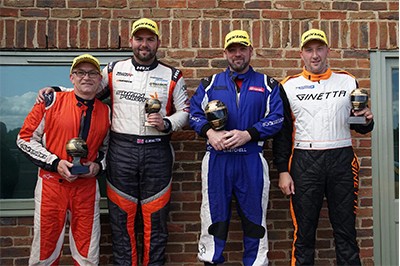 Race two saw the reverse grid. This nominated 6th place finisher in race one Kiprovski to pole. His first ever in the UK! As the lights went out Kiprovski made a good start maintaining his first place into the first corner. Further back Rob Ryder from the last on the grid made up a few places looking to push through the field. Kiprovski dealt well with the pressure of Mitchell , Owen and Cager looming large albeit for a mistake from Cager ending Owens charge to the front. Further back Nunn was battling hard with Warr down the start Finish straight with contact made into turn one ending progress. Branko still soaking up the pressure now from Richard Avis and Mitchell. Branko sadly making a small mistake heading down the start straight slowing allowing the pack behind a run on the Macedonian driver. Mitchell going to his right and Richard Avis to the left passing Branko for first and second. Mitchell unsighted from the over take squeezed Richard towards the pitfall with no contact made. With a lap to go Cager managed a magnificent recovery to claim third ahead of Rob Ryder who was followed home in fourth by Clare Avis our first rookie. This was the first time Clare had tasted podium success in the championship and the series first ever husband and wife podium. 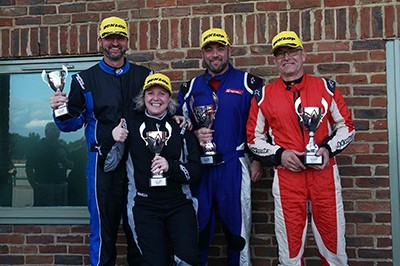