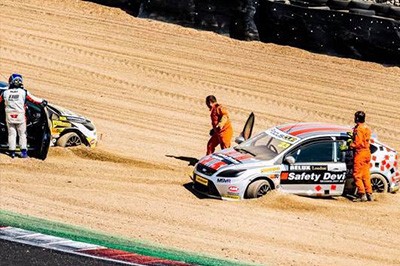 One thing that scares all us racing drivers, including myself, is having a crash. Apart from the fact we could be hurt, there is also the worry of what the car will cost to fix. To some this could end their season, to others it could end their racing completely. Insurance is very expensive. In 2019 a few drivers looked at insurance and came back with £750+ for each round with £1,500 excess. So basically you would need to do over £2,250 of damage before you could claim anything.

We have decided to address this ourselves with our very own Crash Damage Scheme. We are not allowed to call this Insurance, but it works in a similar way. As we now have a few seasons under our belt, we know what the various crashes that happened cost to fix. On the whole there wasn’t a lot of damage throughout the year but a couple of drivers had damages over £3,000. Focus Cup Ltd have decided to take on some of the risk to give drivers peace of mind.

You don’t have to have Insurance or join our Crash Damage Scheme to race The Focus Cup.

When a car receives damage, however caused it is the driver who is responsible for the costs involved in the repair of the car. Driver error, a third-party error or mechanical failure causing damage to the car, are all chargeable to the driver.

The below list is approximate and includes the part, labour for fitting, replace wrapping materials or paint, stickers and VAT.

Crash Damage Insurance is not included in the cost of racing, but for peace of mind, no huge surprise bill following a crash, for a fee of £300 inc VAT per round (Brands Hatch and Croft 2 dayer £450 inc VAT), you would only pay the first £1,200 towards the damages. This is a Crash Damage Scheme operated by Focus Cup Ltd and is not insurance.

Example: you are involved in a bad accident and the cost to repair is £3,500 including VAT. You would only pay £1,200 towards the damages and Focus Cup Ltd would pay the rest of the invoice. To avoid confusion, we will call this the drivers Excess.

Following a crash, all drivers will be given a list of the costs in full, showing the repairs, labour and replacement parts. A driver will be responsible for the cost of the excess.

Example: Driver A, who has paid the Crash Damage Scheme Fee has an accident at Donington and the repair invoice is £2,000. Driver A will pay £1,200 and Focus Cup Ltd £800. Going to Croft Driver A’s excess will increase to £1,800. If a further incident at Croft exceeds the excess the excess for Snetterton will go up again to £2,400.

If the driver has two accidents at an event causing damage, Excess will apply to each accident.

Example – This means that if the driver has damages to the front end on the test day, then the rear end in race 2, the driver will pay the first £1,200 of each incident. However, if the damage is to the same area of the car the two incidents may be invoiced as one requiring the driver to pay the first £1,200. This is also the case when changing from one car to another over the weekend. Each damages invoice will require the first £1,200 to be paid by the driver.

Payment of Fee: the payment for the Crash Damage Scheme must be paid prior to entering the car at each event.

Focus Cup Ltd reserves the right to refuse a driver from joining or continuing with the Crash Damage Scheme.